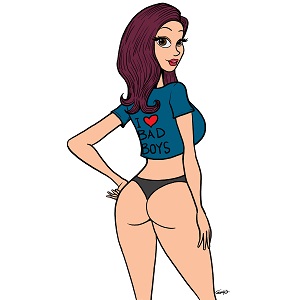 When in the dating world, what women want, and what they go after, are two different things. In fact, if you ever read Cosmopolitan or other magazines, you will notice quickly that women do not truly know what they want or what is good for them. While women think they want a Poindexter with a nice income and big house, this is only true once they start getting crow’s feet and want to get married. However, without a doubt, women in their 20’s almost always prefer the bad boy. With that being said, here are nine benefits of being an asshole to women.

The last thing a woman wants is a needy guy who is there for her and always offering a helping hand. While women love to keep betas in tow who will help them move or change a flat, they will not sleep with these men. Instead, women want the challenge of “fixing” a bad boy. This is true whether a man has no career ambitions, a drinking problem or treats a woman poorly. Think about it, if you look around, you will notice that the cocky, arrogant and rude men get the hot girls while everyone else gets the leftovers.

2. More fun to complain about:

Now, when women sit around drinking and talking about their lovers or boyfriends, bad boys almost always dominate the conversation. In reality, women do not sit around speaking of their boyfriend who has a 4.0 at Harvard or the boyfriend with a successful business who is good to everyone. No, women talk about the jerk who has no ambitions or the classless guy who never calls back and seemingly only wants sex. Whether it is subconscious or out in the open, women want to complain about their man in front of their friends. This is true in most parts of the world, and in particular, this is the case with Western women. While some men think this is a bad thing, it is a great benefit as it will increase a man’s dating value as other women will want a bad boy.

Nothing gets women oozing more than a confident guy who feels he can never make a mistake. While this arrogance may bother people at work or in their personal life, women will eat this up and likely date the guy. Of course, over time, a woman will probably not enjoy an overconfident jerk. However, if you are true to form as an asshole, you should move on to your next female and not worry about the wrath. The truth is beautiful. When a woman tells her friends what an asshole you are, they will all want to find out on their own and are more likely to sleep with you.

When in bed, women want men to make the first move and push her comfort zone. Now, this does not mean that a man should be too aggressive and end up in jail. However, when women get together and chat it up, they all lament about their boring boyfriends who will not bring any excitement into the bedroom. Luckily, an asshole who is true to form will have no problem confidently making moves and getting what he wants in the bedroom. Simply put, women love assertive men. Remember, while in her prime, she will give it up and do all the nasty things with short-term lovers and one night stands. Then, when she gets a ring on her finger and a man to take care of her, she will wither up and not give her husband too much as she wants “respect”.

The rules have changed, and the game is rigged; men have constantly lost their children and fortunes in divorce court. To know this for sure, a man should ask any of his divorced friends how they were treated in court. More than likely, a guy will tell tales of receiving second-class treatment from a feminist judge who simply wants to legislate his or her personal beliefs. For this reason, a player should never settle down and should date around often. Luckily, when acting like a complete asshole, a woman will only take so much and will likely leave her man for a beta male who will pay the bills. Luckily enough, if you are good enough in the sack, you can probably make her one of your plates and hit her up for easy sex in the future.

Some chumps, while navigating the dating world, think they can spend money on a woman and get her into bed. The concept is outdated and laughable. The reality is the opposite. For this reason, you should be an asshole and not offer to pay for anything. The worst case scenario is to split the bill. However, if you are smart, you will conveniently forget your wallet and let her foot the bill. While she will appear angry and disappointed, on the inside, she will be excited that you made her do it your way. While most women will tell their friends and family that they prefer that a man pays because it is proper, it is a shit test. When you pass this, you are in for a fun date.

7. Not drag you to boring events:

Part of the fun of dating is going to birthday parties, weddings, dinners and short trips. Truthfully, this is only fun for women. If a man claims to enjoy these events, he is lying to keep getting laid regularly. Luckily, a bad boy with a mean streak can exploit this as he will not have to go curtain shopping on Saturdays or meet his lover’s friends or family. Now, if you like a boring sex life and want to go meet the family for Christmas, you can be a typical beta nice guy and end up with a dreadful existence.

While you should follow laws and never purposely hurt someone, if you are an asshole, you can get away with more. Think about it, when you set the bar low and a woman does not try to get you to change, you can have your run around town and not worry about the repercussions that other men do not enjoy. Whether you want to drink too much or party with friends all night, it will be much easier if you are an asshole and do not give an inch in your relationship.

Let’s face it, when men were young, they were taught to respect women and treat them nicely. The rules have changed, and that is now a suckers bet. Many men have now discovered that they can get what they want out of the dating world with less work. In fact, as men age and get smarter, they often have a “Zen moment” and realize that by being emotionally unavailable and standoffish, they can get more women in bed, all with less effort. So remember, if you are bored of paying for expensive dinners and listening to women lament about problems, you should consider having an attitude check and changing your ways. To take this point further, a man should look around at his friends and see which ones have success. More than likely, the successful guy is the one who ignores texts, does not buy presents and is horrible listener.

A smart man should never work under old ideas or premises. In the past, to get women, a guy would need to get a good job and treat women with respect. However, women wanted equality, and the rules have changed. Simply put, by being edgy, slight abrasive and rude, a man will get the hottest and most fun girls with the least amount of effort.