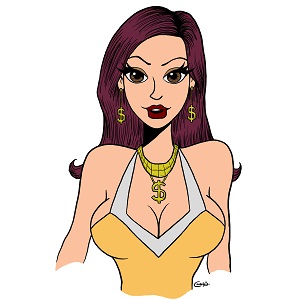 For those of you who don’t get out much, a gold digger is a person who enters a relationship with someone with the intent of improving their own financial standing. To finally end the debate of who’s the greatest gold digger, we’re counting down the top ten. These women (and man) defied the odds by sleeping their way to the American Dream (or at least trying).

Without further ado, the Top 10 Gold Diggers of All-Time!

Deion Sanders said he knew his ex-wife Pilar was a gold digger when she asked for $100,000 just to marry him. Should’ve quit while he was ahead. But at least he was smart enough to insist on a prenup. Pilar was denied even a single penny in the divorce settlement and was ordered to cover her own attorney fees.

“Prime Time” also got custody of their children. I’m guessing this had something to do with Pilar’s history of adultery and her domestic violence arrest. But Deion isn’t quite out of the woods yet. Pilar is currently suing him for pretty much everything you could think of, including a defamation suit which stems from his daughter’s Twitter attack on where she called Pilar a “gold digging hoe”.

Oksana began an affair with Mel Gibson while he was separated from his wife of almost thirty years. His wife filed for divorce, cleaning out his bank account to the sum of over $400 million. Ouch. Later that year, Oksana gave birth to their child but, by that time, she had already left Gibson.

She took him to court, refusing his offer of $15 million and demanding more. Despite her attempts to tarnish his image by recording and leaking heated phone arguments between the two, she was only awarded a settlement of $750,000. Mel was happy. She was not. Oksana later filed suit against her attorneys over the deal.

Gold digging isn’t just for women anymore. With that, I introduce the king of all sugar babies: Kevin Federline. Starting out as a backup dancer for Britney Spears, he jumped at the opportunity to date her. Sure, he already had a pregnant fiance but this is Britney Spears! She got rich dancing around in a schoolgirl’s outfit. What guy didn’t want a piece of that.

Three months later, he had somehow convinced his future ex-wife Britney to not only marry him but to pay for her own engagement ring. They officially tied the knot a couple months later. In just two years of marriage, he had literally driven her crazy. She had just enough sanity to get a prenup, meaning Kevin didn’t get the major payout he dreamed of. But he did get a small settlement, along with custody of their two children and the fat child support check to match.

Ferguson lived an openly extravagant lifestyle during her marriage to Prince Andrew, the Duke of York. She also cheated while he was away attending to his duties with the Royal Family. If that wasn’t enough, she used their continued friendship after the divorce to sell access to the Prince at $750 grand a pop.

Though she didn’t receive a traditional divorce settlement, the Queen paid her off with $1 million in cash without forcing her to sign a confidentiality agreement. This allowed Ferguson to profit from gossiping about her time among the Royal Family, including the over $3 million she sold her autobiography for.

This chick doesn’t know the meaning of the word broke. She started out by marrying successful music producer Damon Thomas at 19. During their four year marriage, she began her head-scratching rise to fame by releasing a sex tape with another man.

Somewhere along the line she found time to be involved with numerous, numerous other men, from models to comedians to professional athletes and who knows who else before marrying NBA player Kris Humphries. Their marriage lasted only 72 days, during which she managed to have an affair with Kanye West and was pregnant with his child before her divorce from Humphries was even finalized. She and West are now engaged.

Even though Kim didn’t get any money in the divorce, she made $10 million from the reality show wedding. Not to mention the rest of the money she and her gold digging mother and sisters have brought in over the years. These women have built an empire jumping from one wealthy man to the next, spreading their legs all the way to fame and fortune.

Orianna dated Phil Collins for the last couple years of his second marriage. He asked for a divorce via fax and a few years later, his 27-year-old former mistress became his third wife. He was 48 at the time.

Judging by Phil’s previous track record, you’d be safe in assuming that this marriage also ended in divorce. Orianne cashed a check for $47 million and continues to use Collins’ last name to this day to promote her jewelry line.

Once upon a time, a 26-year-old Playboy bunny met an 89-year-old billionaire oil tycoon in the strip club where she worked. They were soon married. He died a year later but without writing her into the will.

Smith claimed that she was “orally” (*wink wink*) promised a share of the inheritance but his son battled her in court over the money for over a decade. The case eventually made it all the way to the Supreme Court, where they decided she wasn’t owed a dime. By this time, she had been dead for years after overdosing on prescription drugs.

Bummer. However, the courts have just recently stated that because of the dishonest tactics used by the lawyers representing her late husband’s son, she may be entitled to damages up to $49 million. This money would go to the daughter she had after her husband’s death.

You probably didn’t think things could get much worse for Paul McCartney after he married a woman with only one leg. Well, they did. They divorced six years later but that’s not even the best part. During the divorce proceedings, Mills succeeded in proving herself batshit crazy with antics such as:

She got $50 million plus child support after originally demanding $250 million. Somehow, in her alternate reality, six years of marriage entitles you to split a half-century-old fortune down the middle.

I wouldn’t be the first one to call Mills a gold digger bitch. Her former publicist said as much and more, claiming Mills paid her to lie to the media about McCartney’s finances and insulted his social life and sexual prowess to anyone who would listen.

When Irving began dating Steven Spielberg, she was an up-and-coming actress and he had recently released the box-office record breaking Jaws. Sounds like a match made in heaven, right? Not really. Their relationship ended abruptly with Irving leaving Spielberg for country music star Willie Nelson.

Spielberg didn’t miss a step, releasing multiple blockbusters over the next few years. Realizing the error of her ways (she really has changed, I promise), Amy came crawling back and the two were eventually married. There really is such a thing as a happy ending.

Wrong again. Their divorce was finalized just four years and one child later. Irving received a nine-figure settlement of approximately $100 million dollars. That’s one hell of an acting gig.

Even a prenuptial agreement wasn’t enough to save Steve from her money-grubbing. Well, sort of. The judge refused to recognize the contract because it was scribbled on the back of a cocktail napkin.

I’m sure we’re all familiar with Tiger Woods’ former wife and their highly publicized divorce. Elin cashed out after six years of marriage and raked in $100 million dollars. Despite the hefty pay day, you may remember Woods’ infamous infidelity and wonder how she belongs on this list.

The answer lies in Elin’s actions after the divorce. While living in one mansion and waiting for her bigger mansion across the street to be torn down and replaced with an even bigger mansion, she eventually began dating a wealthy businessman with a billionaire father. But there was something missing that she just couldn’t put her finger on…more money! Eventually she moved on to an actual billionaire, current boyfriend Chris Cline. Cline is more than twenty years her senior.

In the immortal words of Kim Kardashian’s current fiance, “now, I ain’t sayin’ she’s a gold digger, but…”

There you have it, ladies and gentleman. The definitive list of the Top 10 Gold Diggers of All Time. Hope you enjoyed.

Do you disagree with my picks? Think of someone I missed? Let us know in the comments.